April is a story waiting to be told — a baby robin pecking the inside of its delicate shell, a pea sprout uncurling its tendril to poke a finger through damp soil, or an insouciant magnolia soulangeana opening its saucer blossoms with no regard for the consequences of an Easter chill. A cold snap could turn those mauve and cream waxy petals overnight into brown velvet.

Today, my hybrid saucer magnolia (m. soulangeana) is in its third week of peak bloom. Mauve and purple petals ending in creamy tips cover wide-spread bare branches. For once, this early blooming variety susceptible to sudden chills refused to turn brown during a recent cold snap. How much longer these lemon-scented blossoms will remain open like saucers before carpeting the lawn with shedding petals depends on how soon leaves begin to push their way out.

Back in late March, furry green buds cracked to reveal hints of magenta peeping out. In a matter of days, magenta/mauve/cream flowers emerged, looking for the world like tulips — hence, the sobriquet “tulip tree” — yet having nothing to do with the herbaceous bulbiferous geophyte genus. Once the blossoms opened wide like saucers, the tree had earned its non-de-plume “saucer magnolia” or, as sometimes known, “cup and saucer magnolia.”

One year, my young granddaughters visiting from Virginia held tea parties for their dollies under this tree as it dropped spent petals on their heads. This year is too chilly for sitting out there, so I must admire my magnolia from my library windows.

On the east side of my childhood home in northwestern Florida, we had a smaller version of m. soulangeana. I called it the “purple magnolia,” eschewing the Latin that Daddy insisted upon but I couldn’t pronounce. M. grandiflora and the well-behaved m. fuscata, on the other hand, rolled off my tongue without any effort, as well as m. virginiana which I called “the magnolia that came from Virginia.” It didn’t, of course, but from the swampy area in the woods behind our place, where a clear creek ran through the holler. 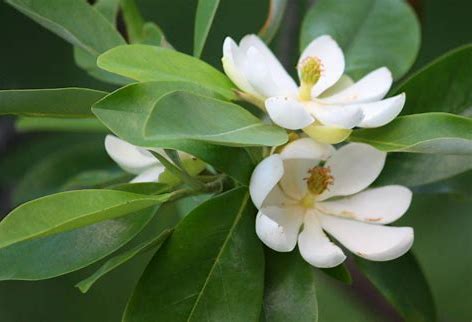 The white blossoms of the Sweetbay (m. virginiana) are similar to but smaller than those of the Southern Magnolia (m. grandiflora). The first magnolia to be scientifically described under modern botanical rules, it’s known also as laurel, swamp magnolia, and white bay (because of the white underside of its leaves. I recall how its delicate scent arose and drifted through the pines, especially sweet after a rain spell. Breezes flipped up the leaves to reveal fluttering white undersides, lovely viewed from our west windows on summer afternoons.

Red bay, also, grew down in the holler. Its not a magnolia but a lovely evergreen bay tree in the Lauraceae family, growing in swampy areas of the coastal South. 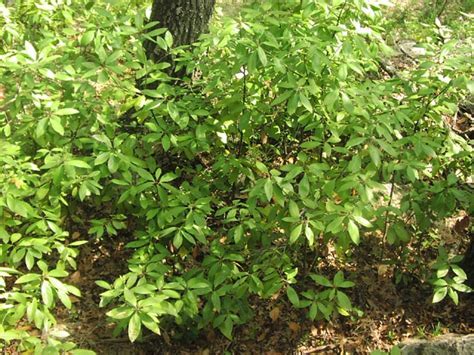 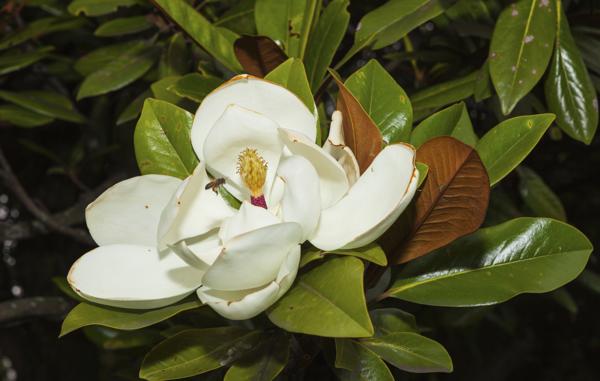 This the one most people associate with the word “magnolia.” The classic Southern Magnolia (m. grandiflora) with large glossy leaves is so called because of its 12-inch waxy ivory petals. Originally from east and southeast Asia, the Southern Magnolia is native in American from coastal North Carolina down to Central Florida and as far west as East Texas; and it’s the state flower of both Louisiana and Mississippi. Maximum height reaches over a hundred feet! Dark green leaves are stiff and leathery and a bit scaly underneath. Its fragrance is an intoxicating lemon citronella. One ivory blossom floating in a glass bowl of water would scent the whole house — as it did the one time Daddy allowed it to be cut and brought into the inside. Years later, on one of my visits to Apalachicola, I found a magnolia blossom on a table in the narthex of old Trinity Episcopal Church. The ushers had to leave the front doors open during the Eucharist because the fragrance was so heady.

Daddy always insisted that garden flowers, as well as wild flowers in the woods, should remain in their natural habitat. He had a point, I’m sure, but I rather agree with the late Elizabeth Lawrence, a Southern writer and columnist from Raleigh, North Carolina. She wrote that “learning to know the native plants, and bringing them into cultivation, is a more practical way of conservation than making laws to leave them untouched” (A Southern Garden, 70). That’s how we came to have a  Sweet Bay magnolia on our place. Daddy carefully dug up a tender sapling with as much of its rich swampy soil as could be retained in a burlap sack, transplanted it to the edge of our own pine copse, and nurtured it for decades alongside the grand Southern Magnolia. Today that would incur a hefty fine from the Forestry Service folks, I’m sure. 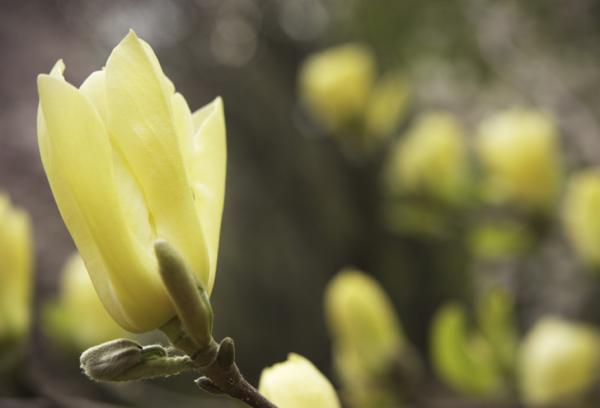 As if these specimens were not enough, Daddy also cultivated a m. fuscata or “banana shrub” so-called because of its ripe banana-like fragrance and compact form. My sister Alice and I used to gather the creamy yellow buds and pretend they were the dolls’ bananas. Once I stuffed the pockets of my summer shorts with them and forgot all about them. Days later, Mother discovered the rotten mess when she did the laundry. Boy, did I get a licking.

Because the fuscata magnolia grows best in filtered light, Daddy planted our one bush near the antebellum live oaks where masses of azaleas bloomed in late March and into April. Its leaves are flossy and dark on top, fuzzy and brownish underneath. 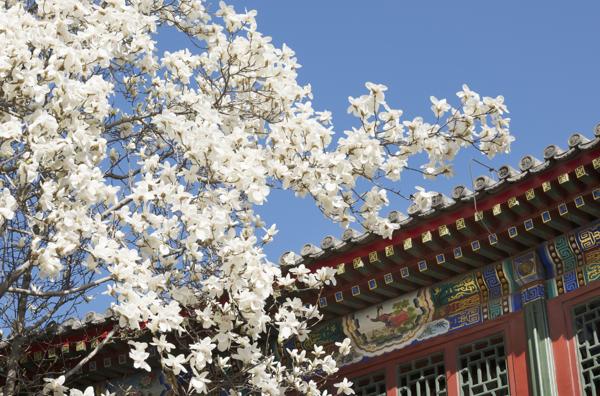 In the Pacific Northwest where I now live, the white-blossomed Star Magnolia (m. stellata), is a common sight in early spring gardens. Native to China, they are the earliest to bloom, weeks ahead of other spring flowering shrubbery and trees.

These are only five of over hundreds of flowering plant species in the subfamily Mangolioideae. In 1703, French botanist Charles Plumier described a certain flowering tree from Martinique and gave it the genus name of Magnolia in honor of Pierre Magnol, a fellow botanist. Later, Swedish botanist Carol Linnaeus applied the name magnolia grandiflora.

Long before the 1600s,  however, the Chinese began naming this ancient genus. They considered the magnolia to be the perfect symbol of womanly beauty and gentleness.

Magnolias are considered to be one of the first flowering plants to evolve on Earth before bees and, thus, pollinated by beetles. Ancient magnolias are recognizable still today as magnolias. Consequently, magnolia means stability and grace, insouciant or not.

Dan Cooper, “Anything but Magnolia,” The Frustrated Gardener, Blog at WordPress.com, April 8, 2018