The quintessential example of Early American gardens is the historic district of Colonial Williamsburg in Virginia’s Tidewater region. A benign climate and rich fertile contribute to a prodigious assortment of herbs, flowers, fruits, and vegetables, even small orchards. My first visit ten years ago gave me the impression I had walked right into the pages of The Gardens of Colonial Williamsburg – the proverbial dream come true for me.

I peered over picket fences, entered black iron gates, strolled narrow paths set in brick patterns of running bond or herringbone among meticulously restored gardens behind individual garden gates. I watched costumed children play inside one fenced back garden of one of the “middling class” houses. One little girl flew up into the air on an old-fashioned swing hung from a large tree branch.

Twenty-years after the first British settlement in North America at Jamestown in 1607, English colonists founded Williamsburg on high ground between the James and York rivers. By the 1700s, merchants and tradespeople had established villages and towns and thriving commerce serving outlying farms and plantations. Each “middling class” householder cultivated his own self-sustaining food supply in utilitarian potages – back-door kitchen gardens. The colonial woman provided plants not only for foods but also flavorings, medicines, and chemicals. Madder and woad were used to dye fabrics, and basil and sage flavored meats. Yarrow, angelica, feverfew and valerian are old English herbs used in treating common physical ailments or aiding in childbirth. Southernwood and pennyroyal were insect repellents; tansy planted outside the back door repelled ants from crawling inside.

Only later as personal leisure increased among the upper classes did the colonists begin to incorporate “pleasure gardens” into the landscape, purely for the delight in formal landscapes they, or their ancestors, had left behind in England. To them, a garden was nature tamed, trimmed, and enclosed by human intervention with the natural landscape. They brought seeds and bulbs with them in order to establish a version of their old gardens back home

A balanced geometric symmetry within enclosed spaces characterizes the parterre, as in John Blair’s garden, show above. This Dutch design comes from the era of William of Orange and Queen Mary during the late 17th and early 18th centuries. In colonial gardens, the design comprises what’s termed a “quincunx” – that is, an arrangement of four squares or rectangles with a fifth area in the center where all the crosswalks connect. It is meant to be viewed from upstairs windows or balconies, or by geese flying overhead on their way south for winter.

Narrow paths of bricks or crushed shells of clams and oysters from Chesapeake Bay separate the parterres by an axis with crosswalks, rather like the British Union Jack. The usual brick pattern used was running bond, sometimes a herringbone configuration. Broken brick edge shell paths to keep the pieces from washing into the garden beds.

Along with geometry, choice of plant material and enclosure comprise the other design elements. Spring tulips and summer flowers and roses fill each section. In fact, “tulipomania” – a craze for Dutch tulips – reached its apex in the 1630s and then spread to England with William and Mary. From there, the Virginia colonists brought bulbs and introduced a mania for tulips in Williamsburg.

Herbs may or may not have been incorporated into pleasure gardens; if not, they were planted in a separate quincunx. John Blair did combine them in his.

Shrubbery accents the corners. Boxwood hedges, sometimes wood picket fences, enclosed each garden. Brick walls, on the other hand, with their distinctively curved roof-shaped top edging protecting the mortar from seeping moisture during the rainy seasons, enclose the grounds of the Governor’s Palace and Bruton Parish Church (established 1674) in Williamsburg.

When Royal Governor Alexander Spotswood arrived in Williamsburg, he thought gardens should be grand, especially surrounding the Governor’s Palace. He wanted it to look like a palatial European estate. He enclosed formal gardens with boxwood hedges, as King William, himself, favored clipped boxwood, the sempervirens Suffrusticosa. Likewise, he ordered shrubbery clipped and sheared into gumdrop or ball shapes, and yaupon holly in thick columns.

The John Blair House features a prominent fragrance garden not just to look pretty but also to be used to create scents for perfumes, sachets (“sweet bags’), incense, potpourri, insect repellants, lavender for keeping linens fresh, et cetera. Mr. Blair laid his brick paths in running bond between diamond-shaped beds of flowers and herbs. He enclosed the whole in boxwood hedges. I thought this one of the prettiest of the small private gardens as I viewed it from over a white board fence, just outside one of the hedges.

Behind the house stands a small orchard of peaches, apples, and sour cherries. Clipped American beeches surround the orchard. An assortment of fragrant herbs grows in a small kitchen dooryard garden. 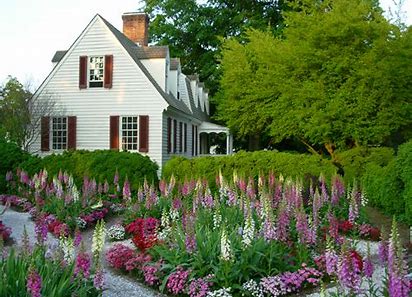 John Custis, a prominent citizen and landowner, owned The Custis Tenement. This is the John Custis, by the way, whose daughter-in-law Martha Dandridge Custis, as a widow, married George Washington.

In 1725, Mr. Custis wrote of “a pretty little garden in which I take more satisfaction than in anything [else] in this world.” Personally, I echo his sentiment as I enjoy my own version of a colonial pleasure garden from my arbor bench, or if I climb onto the bathroom counter and look down from the little window, especially in April and May and June.

Colonial Williamsburg today is an interactive, living-history museum with costumed docents and interpreters on site. Located on 300 acres  From hands-on activities to guided tours of original 18th-century buildings to an unmatched folk-art collection, there’s something for everyone at Colonial Williamsburg. Open for public tours daily from 8:45 a.m. to 5:00 p.m.