Our obsession with the perfect lawn is nothing new. Two centuries before the suburbs of the post-war 1950s, George Washington designed his west “sea of green” — a large grass plot surrounded by a carriage road of crushed oyster shells. We walked along the right hand side, hoping to avoid crowds of tourists lined along the left road, not realizing that was the only way to get inside the house. After all, it was the house we had come to see and imagine ourselves visiting my childhood hero. We wandered the grounds instead, invited ourselves to sit in one of a row of Windsor chairs on the east piazza overlooking the Potomac, breathed the rarified air of an April afternoon.

Washington’s landscape design reflects his personal sense of decorum and measured self-awareness as a  heroic classical  hero, a virtual Cincinnatus of his own time. The original Mansion House Farm, as he called it, began as a more rigid design following the English gardens of geometric forms, axially symmetrical, filled with clipped topiary — embodying royal prerogatives of the Tories — as I described in a previous blog about Colonial Williamsburg.

What visitors to Mount Vernon may view today is the second phase begun in 1774 and continued until 1789 for both house and grounds. Washington patterned his working farm after the scientific agriculture of the Enlightenment era. Over time, the farm developed into a completely self-sufficient 7,600-acre plantation of five farms. More manageable for today’s walking tourists is the 500-acre home farm or, as Washington referred to it, the “Mansion House Farm.”

The landscape was a symbolic return to unadorned nature with looser edges, less like the enclosed parterres of Colonial Williamsburg gardens. Yet, form must follow function. Herbs and vegetables still must be planted in easily accessible rows, with segments partitioned by narrow walks of crushed oyster shells. Mount Vernon’s Upper and Lower gardens demonstrate this point.

“. . . a neat flower garden laid out in squares, and boxed with great precision. Along the north wall of this garden is a plain greenhouse.” ~ Benjamin Henry Latrobe, 1796

Latrobe is referring to the brick conservatory or orangery on the north side of the Upper Garden, warmed by a hot flue system in the floor. During the winters, Washington kept (as do Mount Vernon’s gardeners today) tropical plants such as key lime, lemon and, orange trees from three to five feet high, as well as palms, and a banana tree, then wheeled them outdoors for summer decoration.

Washington grafted his own fruit trees. Eighteen different varieties of pears were espaliered against the south wall. Most of the cider apples were grown in the attached vineyard enclosure or out in the orchards.

Low boxwood edges square parterres of vegetables and herbs in an informal layout. One such square contains “flower knots” of germander in a bed of crushed oyster shells. His herb list included both culinary and medicinal plants: basil, rosemary, parsley, sage, dill, chives, lavender, small bay trees, Cayan pepper from the West Indies, digitalis or foxglove, not to mention the mint and roses that Martha Washington distilled into “waters.” Pungent bay leaves freshened stale air in a room when boiling water was poured over them as they lay on a red-hot fire shovel in the fireplace.

No oyster shell paths here in this English-style potager. A wide grass lane dissects the two halves of the Lower Garden, and the narrow access paths among plots are “paved” in grass, as well. Here is where Washington’s workers — usually indentured Europeans — followed time-honored gardening techniques, laid out beds for convenience and growth, not according to some artful aesthetic.

Brick walls enclose this sloping lower garden to help maintain the best microclimate for early vegetables and tender fruit such as peaches and nectarines, cherries and plums, along with figs, most notably the Brown Turkey figs. A pointed coping along the top of the brick walls keeps moisture from rains seeping down into the mortar joints.

This garden plot probably had been established first back in Washington’s father’s day. The south-facing slope below the bowling green catches the best sunlight and provides ample drainage. Straw mulch keeps the weeds at bay. Nearby stables render plenty of fertilizer. One of the corner octagons houses the seed house storing collected seed for the following spring’s planting. All the plants here are ones Washington had recorded in his notes and on lists.

THE BOTANICAL GARDEN and the VINEYARD ENCLOSURE

Washington often called this area “my Little garden” or “my Botanick garden” where he spent most of his time gardening on his own.  Attached to the east end of the Upper Garden, this enclosure illustrates Washington the Enlightenment man of scientific experiment. He liked to try plants too tender for the Virginia Piedmont climate, such as seeds of “Pride-of-Barbados” (Caesalpina pulcherrima), a sort of flower fence. He experimented with nuts such as pecans and hickory.

Today, the Vineyard Enclosure is restored according to the most recent archaeological and documentary evidence. 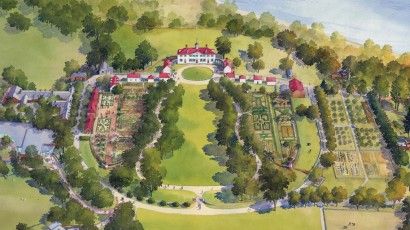 Like Monticello and the gardens of Colonial Williamsburg, Mount Vernon is a living museum. Visitors can spot a few workers among the rows, although none are in period dress, sadly, just as the docents inside the Mansion itself are not in costume.

Mount Vernon is open for tours from 9:00 a.m. to 5:00 p.m. daily. Check the website for one-day admission tickets and prices.