“Once upon a time, there were four little rabbits.” So begins one of the most iconic children’s stories written and illustrated by one of the most iconic children’s authors, Beatrix Potter. Her own childhood menagerie of mice, frogs, snail, lizards, birds, a dog, a hedgehog, a bat, as well as rabbits, served as inspiration for many of her little story books. But did you know that she was a student of natural sciences and a gardener, too?

Although London born and bred, Beatrix was a country girl at heart. Her idyllic childhood summers were at Camfield Place, her grandmother’s 300-acre estate in rural Hertfordshire, the roots of my father’s English ancestors. Great banks of rhododendrons bloomed and a yellow rose climbed the brick kitchen garden wall. Her parents sampled five difference place in the Lake District for 20 years of long summers as they escaped London’s sulfurous air.

When she was in her 20s, botany fed her interest in natural history. She bagged insects to study, dug for fossils, studied anatomy of animals, and sketched Old Roman archaeological ruins. Later, she added fungi to her studies. Having been educated at home while her younger brother was sent to boarding school, she turned her old schoolroom into a botanical laboratory where she could sprout spores and study slides under her microscope. By almost 30 years of age, she had written and refined an academic paper for the Linnean [botanical] Society, but the gentlemen deemed it unpublishable. The topic? “On the Germination of the Spores of Agaricineae.” And that was that.

Beatrix Potter began to garden with pencil and paintbrush, observing plants at close range as well as visiting art galleries with her father. It was the fashion in those days to admire the pre-Raphaelites, and their meticulous copying of flowers and plants influenced her own later works. She could have become an accomplished illustrator of botanical books. Instead, she wrote and illustrated stories for specific children, beginning with picture letters, stories, and traveler’s tales. 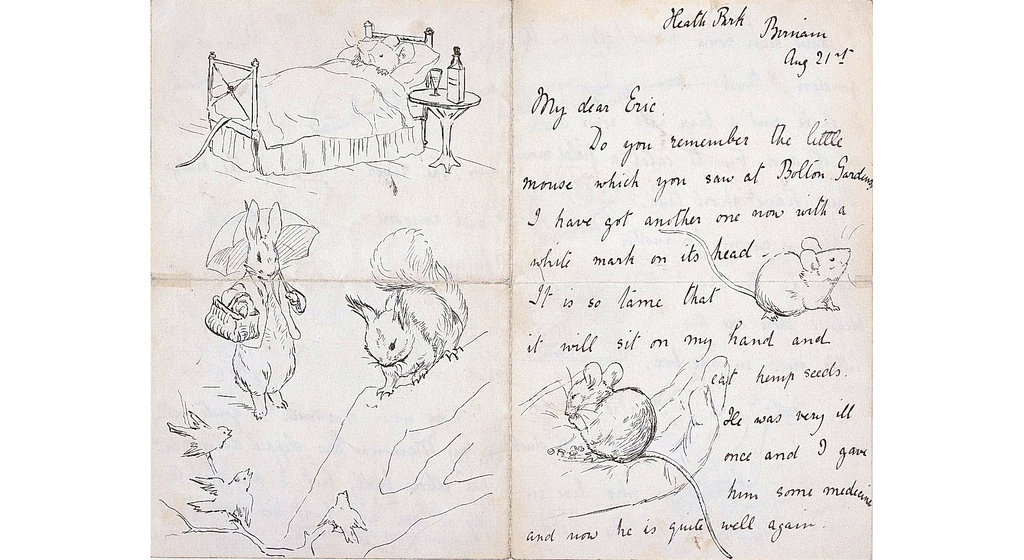 From these beginnings, she adapted one, at the suggestion of a friend: “The Tale of Peter Rabbit and Mr. McGregor’s Garden.” Eventually, after several rejections from publishers, Frederick Warne & Co. took on the project in 1902, with the proviso that she would water color the sketches.

Note, in her illustrations, the exacting detail of plant material, sizes of terra cotta pots, soil sieves, watering can, rakes, spades, trowels,  a wooden wheelbarrow, even a cold frame, drawn from her astute observations of her father’s resident gardeners.

From her earnings, Beatrix Potter was able to buy property in the Lake District where she had summered with her family. Hill Top Farm was “a regular old-fashioned farm garden” behind the village of Near Sawrey. Farmsteads strung out along the road included cottages with quaint names like Buckle Yeat and Belle Green. She planned her first garden based on an Arts & Crafts style that Gertrude Jekyll popularized in the late 1800s-early 1900s. This vernacular combined traditional materials in dense plantings that we now love as the proverbial English-style garden. 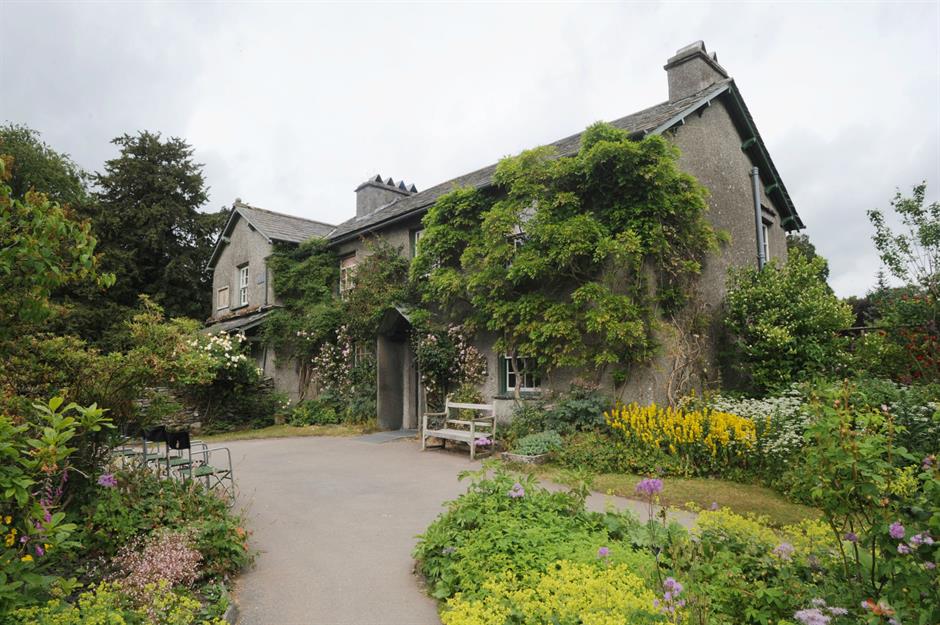 Gardening is a hole dug in the ground into which to pour money, she once told a friend. With no husband to pay the bills, she had to earn her own money. Her book sales and profits from spin-off merchandize funded her garden projects. She never allowed her gardens to sleep as she continually propagated and seeded varieties. As the garden multiplied, so did her stories multiply. Her characters grew up, married, had offspring as prolific as bunnies who became soporific from eating too much lettuce. In fact, garden lettuce was a source used in preparing pharmaceutical sleep aids, according to her copy of 16th-century Herball by John Gerard. I personally first learned that word–soporific–when I read aloud The Tale of the Flopsy Bunnies to my own young children. 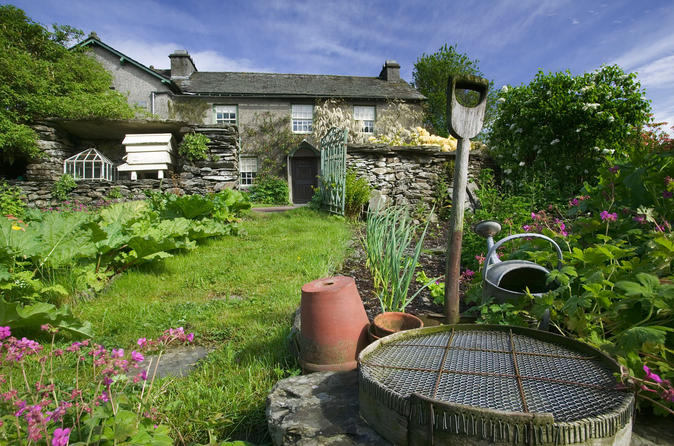 Spring at Hill Top brought out English Bluebells, a national treasure, along with primroses followed by pansies and violets. Columbine cultivars often hybridized with one another, then tended to revert to its ancestral blue and purple. Purple clematis wound itself up the canes of climbing roses, and wisteria soon followed the façade of Hill Top house, festooned like bunches of white grapes.  Foxgloves sent up tall spies of pink pendulous bells beloved by bees. Beatrix Potter’s gardener’s eye chose plants appropriate to her characters. For example, mice embroider pansies on the sherry-colored corded silk coat in The Tailor of Gloucester.

Foxgloves bloom behind the “gentleman with the sandy whiskers” we recognize as Mr. Fox. Jemima Puddle Duck collects summer herbs for poultry seasoning–sage and thyme, and mint and two onions, and some parsley”–for cooking goose. 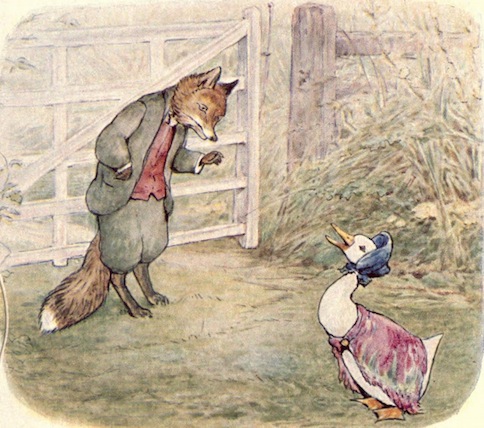 Peonies and irises flourish in the June garden of The Tale of Tom Kitten. Beetles and bees, spiders and butterflies invade the abode of Mrs. Tittlemouse, just as they still do at Hill top. In Beatrix’s garden, ants still perform a country dance over fat round buds, delirious with the nectar. Timmy Willie eats strawberries in The Tale of Johnny Town-Mouse and Peter Rabbit nibbles carrots and radishes and then looks for some parsley in The Tale of Peter Rabbit. 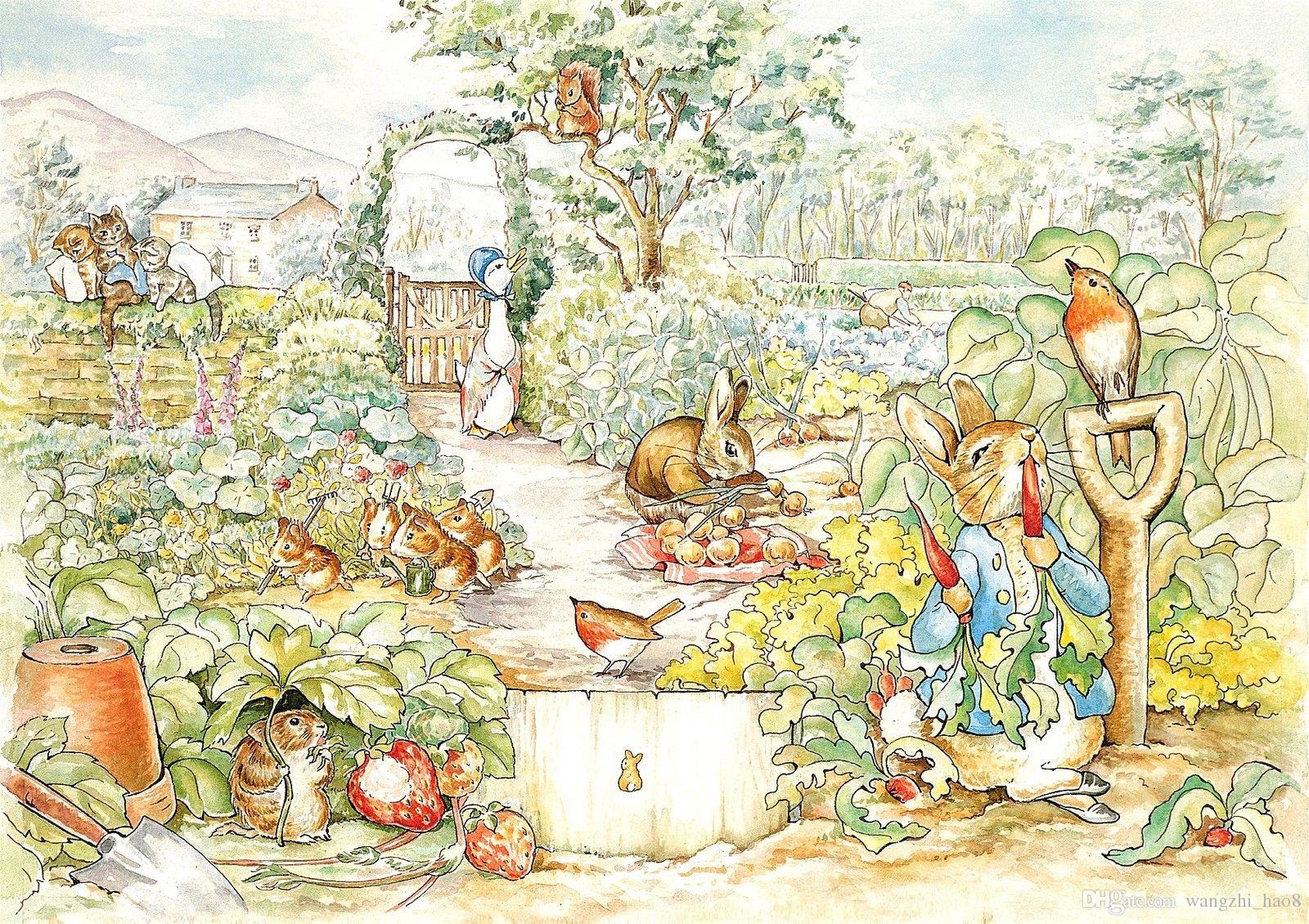 Beatrix Potter married late in life, her first love having died after a sudden onset of leukemia. She increased her commitment to farm and garden life–including raising sheep and dairy cows, chickens and turkeys, although probably not geese or ducks–while her husband continued his law practice. Roses “smothered” the walls of Castle Cottage, their marital home across the road from Hill Top. Beatrix planted even more, including a pink “Queen of Bourbons” that exuded an exhalation of pure summer.

Visitors enjoyed seeing the familiar story book garden for real, with potted geraniums in the window sills, orange and yellow nasturtiums, rhubarb where Jemima Puddle Duck tried to hide her eggs. And, yes, rows of lettuce.

Beatrix Potter died 22nd of December 1943. She left all her lands to the National Trust, instructions that her ashes be spread in the soil on the little hill overlooking Hill Tops’s farmhouse. Over 4,000 acres of England’s Lake District–lakes and hills, resident cottages and pastures of Cumbria–remain empty of holiday cottages that spoil other landscapes. Instead, it retains the view of the land that Beatrix herself loved and bequeathed to her young readers through her Peter Rabbit books.

Above: Detail of my children’s crib quilt, passed on to my nieces, and eventually to grandchildren who learned early to love Beatrix Potter